What’s the difference between a herd and a swarm? Knowing the answer will do more than impress your 8th grade science teacher – it can help you understand the future of marketing.

While a herd represents a pack of animals blindly following a single leader (sometimes to their own demise off the nearest cliff), a swarm is entirely different. Swarms, flocks and schools comprise honeybees, birds and fish respectively. Unlike herds, swarms are not controlled by a single individual, they follow a collective intelligence that empowers the whole to accomplish tasks impossible for any one member of the species.

When a swarm of honeybees needs to find a new home for the hive, they work together. They take into account proximity to pollen, fresh water, safety from predators and a myriad of logistical requirements – certainly a task well beyond the scope of any single bee.

Swarms are smart, herds – not so much.

This intelligence of swarms inspired Dr. Louis Rosenberg (a serial entrepreneur and multi-degreed Stanford engineer) to develop a system to aid in better decision-making and predictive modeling.

His platform (called Unanimous.ai) combines artificial intelligence with the wisdom of crowds – small crowds, to be specific. To validate the model, he took on a real-world challenge anyone could appreciate. He implemented a prototype to predict the winner of the Kentucky Derby.

Not only did Unanimous.ai pick the correct winner, it correctly identified the superfecta – the first four horses to win – in the correct sequence. Not a single human matched those results.

Dr. Rosenberg placed a $20 bet on his long-shot prediction and won $11k.

A true believer in the scientific process, he continued to test and refine his approach. Each time, the results improved in accuracy. The system was getting smarter. In early January 2017, he was challenged by Modern Trader magazine to predict Trump’s approval rating 100 days into his presidency. He accepted.

Using a group of 76 participants collaboratively responding using the Unanimous.ai platform, the prediction came in at 42%. 100 days into Trump’s presidency, the official counts of his approval rating were announced – 42%. 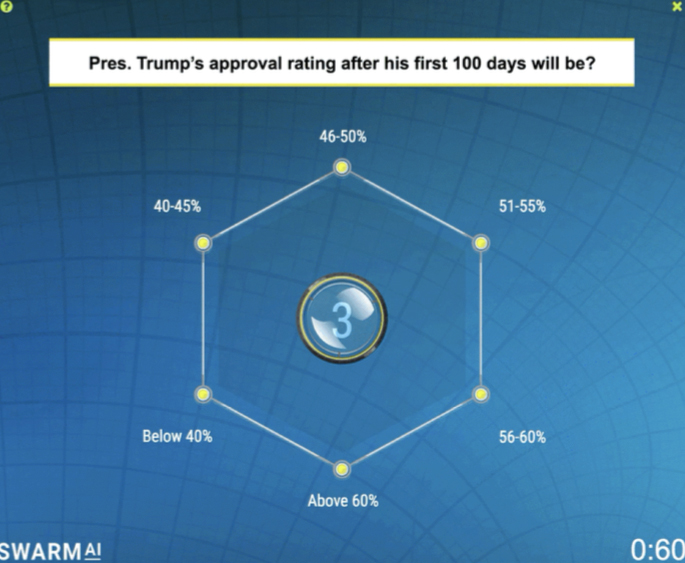 Several tests and predictions later, Unanimous.ai went on to win “Best in Show” at SXSW 2018 and top honors in the “AI and Machine Learning” category. While the concept was inspired by nature, the execution involves the integration of artificial intelligence and human intuition that is changing how marketing decisions get made, from product design, to ad testing and innovation mapping.

Swarm sessions are conducted with participants who answer questions in real time and can see how others are responding. Swarms allow “the initial human response system to calmly react to the message, deliberate with like-individuals, and converge on an answer that best meets the needs of that group,” according to Dr. Rosenberg.

Compared to polls and surveys, swarms have stronger, statistically significant results despite much smaller sample sizes.

To further refine its approach, Unanimous teamed up with Oxford University to perform comparative studies of polls vs. swarms, testing the accuracy of group decisions and predictions.

The study compared a poll of 469 football fans with a swarm of 29 football fans in a challenge to predict 20 Prop Bets during the 2016 Super Bowl. Results revealed that the poll results, although based on 16 times the number of participants, was significantly less accurate (47% correct) than the swarm (68% correct).

This represents a significant amplification of intelligence resulting from swarming. When compared to individual poll responses, the swarm outperformed 99% of participants.

The implications for applying swarm intelligence to marketing are profound.

Swarms capture how participants behave, rather than just what they report so brands can gather strategic insight into not only what their customers think, but how they think, capturing the data behind the debate.

This is the reason why “continuous voting online using up-votes, likes, stars, and shares is a completely flawed method of generating insight.”

Dr. Rosenberg continues, “It’s part of the reason why swarming gives more accurate results than votes, polls, surveys, and focus groups. Everyone is equal. Strong personalities can’t take control. And there are no leaders and no followers – there is just a “meeting of the minds.” To clarify further, we return to the herd.

Evolving not as a form of intelligence, but as a reactive form of protection from predators, herd mentality has a dark side. We humans are innately conditioned to follow the pack as well, which can sometimes work out fine – or have you running blind off the nearest cliff.

Contact
We use cookies to ensure that we give you the best experience on our website. If you continue to use this site we will assume that you are happy with it.Ok